Through The One Last Door 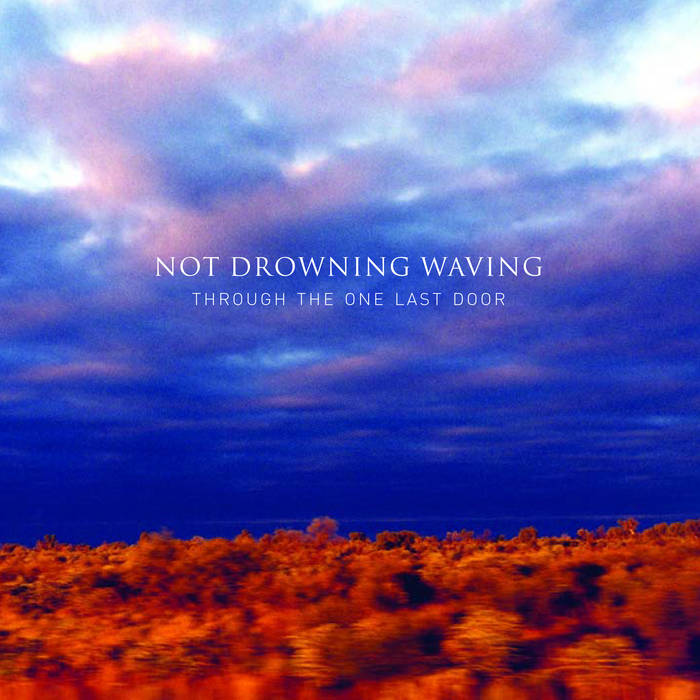 In cavernous beer barns across Australia, sweat and smoke condensed on ceilings and rained down on t-shirted blokes, crushed like fish in cans, desperately shielding foamy glasses from stray elbows. In front of them, bands flailed away at four-square guitar anthems. Lights blinded. Amps sucked electricity until the grid buckled. Singers shouted to be heard. It was loud. It had to be. In the early 1980s, they were always, always trying to drown out the noise from the bar.

Not Drowning, Waving arrived with other ideas. Why not play in places that didn't fit the description? Why not write songs with texture and space as well as melody and rhythm? Songs with colours from the non-rock palette: piano, violin, cello, harmonium and a whole library of things that go clack and thud when you hit them? And why not turn for inspiration to places generally overlooked, from the acoustic and electronic lines of old Europe to the indigenous atmospherics of this country and the islands that surround us?

It was a big plan. Maybe, sat around a wonky laminex table in a Richmond kitchen, they assured each other that it was so crazy it just might work. Or maybe they simply didn't know any better. They were only two (at first, and then quickly six) wannabe musicians who knew each other from the inner city share house circuit. Why would they know the rules of pub rock? And why would they care?

If they did have an inkling of the preposterousness of their scheme, they obviously ignored it. NDW failed immediately, and in every ongoing sense, to fit in with the prevailing trends of the Australian music industry. They were proudly, brilliantly unlike any band this country has produced. And the sound they made was as distinctive as it was indefinable. They wrote songs you could feel like sunlight on your skin, taste like salt left behind by the sea.

Critics loved NDW because they demanded adjectives. Their music was haunting, evocative, brooding, sensuous and a million other words that excite people who type for a living. Looking back, the adulation that tailed them probably lent an image of pretentiousness, though the band did little to deserve that millstone. Okay, maybe the poetic name was a problem, but there was nothing precious about them as performers or people. Even now, they will be squirming as they read these words, because they're stupidly modest. They would choose to deflect and demur and distract. In record stores, you could usually find NDW filed under ambient or art-rock, ill-fitting labels if ever there were. Truth is, the band were often minimalist, but they never made background music. And they may have been arty by comparison to other acts of the era (look mum, no blues riffs), but they knocked out some glorious pop tunes.

If NDW were misunderstood, it was most likely because they were ambitious and forgot to do the Australian thing and apologise for it. They bypassed the accepted career path of finding a sound and then polishing it into a single, shining signature note. They were always packing bags in search of new territory, venturing at first beyond the city into the bush, and then beyond our borders, across the Coral Sea and out into the Pacific.

NDW made half a dozen albums and a couple of film soundtracks in the decade they spent together. Another Pond, the debut, was recorded in a spare room and feels like the blueprint it is, a definition of the stillness at the core of the NDW sound and a declaration of intent to move away from it. The Little Desert followed, a stately, almost entirely instrumental album which was conjured in a church in Elsternwick, but calls to mind the beautiful and unsettling landscapes of outback Australia. Cold And The Crackle pushed outwards and inwards, balancing those landscapes with portraits, contrasting wide open road with claustrophobic suburb, filmic vista with sinewy groove.

The band's twin high water marks would follow. Claim (I can still remember the anticipation of holding it for the first time) seemed to draw together all of the strands that had come before, boosted by steel-eyed confidence and an evolving songwriting poise. Rolling Stone named it Album Of The Year. Comparisons were drawn to the likes of Peter Gabriel and David Byrne, both of whom were already fans. Acclaim poured in from offshore. A contract was signed with Warner Bros in New York, inspiring the local office soon after.

Next came Tabaran, a collaborative project with musicians from Rabaul in Papua New Guinea. Neither exploitative nor the slightest bit anthropological, it was a genuine, joyous integration of cultures, a landmark album which sounds as startlingly right today as it did in 1990. Its unique hybrid confused the marketing departments of the major labels, but that didn't lessen the achievement.

Topping it was always going to be a problem. Circus, which followed in 1993, showed a band at full maturity, but pulling in different directions, wrestling with the question of where to go. It's a record packed with great songs but it feels, with distance, somewhat overthought, less cohesive than it might have been. And when it didn't prove to be the expected global foothold, a disillusioned band did what so many others have done before and since, picking at their own threads until they fell apart. What counts now is what they left behind. And so much more went on in the songs of NDW than can be captured on this page. I could tell you about the back porch drama of some of David Bridie's lyrics, or the pinpoint dissections of colonialism in others. I could tell you about the headstrong, affirming balance of passion and compassion. I could tell you about the flights of whimsy and wicked good humour. I could tell you about the fiery, unmissable live shows.

Or I could just tell you that the funny thing is, given the starting position, Not Drowning, Waving ended up a truly rocking act. They may have been un-ironed rather than ripped and torn. They may have had (mostly) sensible haircuts. They may have been polite to old people. Their audiences may have often been seated. But these guys could rock hard. They could sooth and they could threaten.

There are two discs here. One is full of tremendous instrumentals. The other is full of tremendous instrumentals too, but they have words and what you'd call singing. If you're reminding yourself of a band you used to love, settle back and enjoy the re-discovery. If you've never before been to the places Not Drowning, Waving went, then there's quite a journey in front of you. What I wouldn't give to be hearing this for the first time. Christ, I'd be willing even if it meant going back to the 1980s...

We are grateful to Amanda Brotchie for delaying her film making career and adding her unique sound in those early days.

Thank you Penny Hewson, your talent humour and strength inspired and enriched those long tours and recording sessions. The cornchips were handy as well!